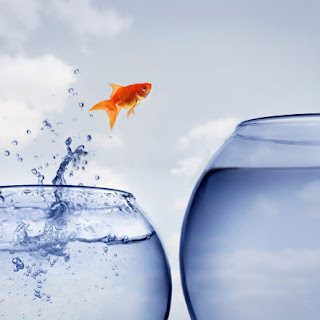 "What's important is to notice what we do with our fear. ... Fearlessness simply means that we do not give fear the power to silence or stop us."

That's from page 152 of Turning to One Another by Meg Wheatley.  Here are a question to think about: 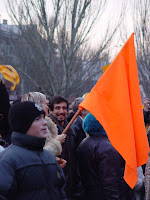 And here's a picture of the "Orange Revolution" of 2004, when the Ukrainian people protested a fraudulent election (p. 155).

How would you answer her question?

Wangari Maathai  called herself an "accidental activist" (p. 147).  I read her book — Unbowed: A Memoir — shortly after it was published in 2006, a few months before I started blogging.  The story of her life was so compelling that I still remember details from the book, which I rated a 9 of 10.  In the summer of 2011, I read a beautiful children's book about her called Seeds of Change: Planting a Path to Peace by Jen Cullerton Johnson.  When I learned Wangari Maathai had died (September 25, 2011), I felt it as a personal loss, maybe because she was born the same month I was born, in April 1940.  I wrote about these two books on my Bonnie's Books blog.  It's interesting that today's question is about creating change, and the children's book about Wangari Maathai is entitled Seeds of Change.

My book club on Facebook, made up mostly of clergywomen, read Margaret Wheatley's Turning to One Another a couple of months ago.  Here's an exchange between Barbara and me on this very section of the book: 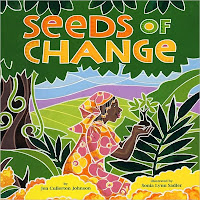 Barbara:  "Part III, #11, (pp. 146-7):  What is our role in creating change? — I appreciated being reminded of Wangari Maathai's courageous work to plant trees in Kenya:  The Green Belt Project.  I'm sad to know Dr. Maathai died several years ago, yet her legacy continues to help humans and the earth.  I'm wondering whether anyone out there sometimes feels inadequate — or your work feels inadequate — when learning about stories such as Dr. Maathai's.  Every contribution counts and makes a difference, but do you ever wonder whether your/our work is effective?"

Bonnie:  "Barbara, to answer your question, yes, I feel inadequate, wondering if I'm really doing anything meaningful.  I haven't done anything that inspired women to plant millions of trees in Kenya, as Wangari Maathai did.  But in both of the classes I taught on Sunday, we talked about Luke 13:20-21, which says:  'To what should I compare the kingdom of God?  It is like yeast that a woman took and mixed in with three measures of flour until all of it was leavened.'  Yeast, or leaven, works slowly but steadily.  What I say or do today may seem insignificant to me, but it could make a difference to someone someday that I can't even imagine.  For example, Shirley saw that I mentioned here on Facebook that 'my online book club' was reading Meg Wheatley's book.  Since she's in my online Book Buddies discussion group, she asked if that's our next book for discussion.  Now it is, because she and I decided to do it.  Donna is reading the book, too, and will join that discussion.  That's a mere three of us in that discussion, and (so far) only three here:  Judith, you, and me.  But look at the world map at the bottom of the Book Buddies blog.  Few of us are still talking about books, though there were several of us a few years ago.  But look at the map — [NOTE:  I'm updating the data] — people from 5637 places have read the Book Buddies blog in the last 2-1/2 years, or if you click on the map, you'll see that it's been viewed 42,801 times in that same period of time."

And our Book Buddies group has grown beyond the original three for this discussion.  I'm still hoping Barbara will join us here.  So let's answer Meg Wheatley's question:


What is our role in creating change? 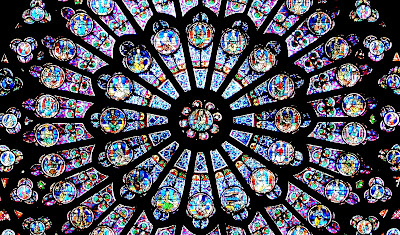 When I googled "sacred" to find an image for this post, this stained glass window came up among other pictures of cartoon characters with swords, that seem to be part of the gaming world.  It was in the 13th line of images, which may be important on this Friday the 13th.  (Or maybe not.)  You can see it more clearly if you click on the image to enlarge it.  Anyway, in Turning to One Another, Meg Wheatley says:


"Sacred is not a special place, or a ritual, or a particular group of people.  It's more normal than that. ... the ritual isn't sacred, it just opens the door to the experience. ... sacred is available in our day-to-day lives" (p. 136).

It's all about being connected.  She asks the question at least three different ways.  How would you answer? 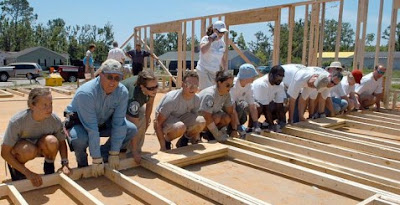 Think of "any experience where you worked for others rather than yourself" (p. 129).  Meg Wheatley asks these questions.  Choose one or two — or just tell us about the experience.
This weekend, I read about a brave soldier and learned this:


"What motivates soldiers in combat is not hatred of their enemy, but love for their comrades."

Wheatley said a lot in this part of Turning to One Another.
How would you answer her question:  "When have I experienced working for the common good?"