Notes of a Native Son ~ by James Baldwin 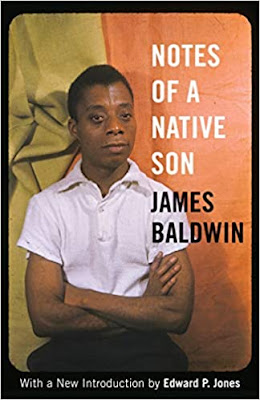 
These ten essays explore what it means to be Black in America by capturing a view of black life and black thought at the dawn of the civil rights movement and as the movement slowly gained strength.  Baldwin probes the complex condition of being black in America.  He addressed the issue with a powerful mixture of outrage at the gross physical and political violence against black citizens and measured understanding of their oppressors, which helped awaken a white audience to the injustices under their noses.  The book collects ten of Baldwin's essays, which had previously appeared in such magazines as Harper's Magazine, Partisan Review, and The New Leader.


In spite of his father wanting him to be a preacher, Baldwin said he had always been a writer at heart.  He tried to find his path as a Negro writer; although he was not European, American culture is informed by that culture too — moreover, he had to grapple with other black writers.  He emphasizes the importance of his desire to be a good man and writer.


Baldwin castigates Harriet Beecher Stowe's Uncle Tom's Cabin for being too sentimental, and for depicting black slaves as praying to a white God so as to be cleansed and whitened.  He proceeds to repudiate Richard Wright's Native Son for portraying Bigger Thomas as an angry black man, viewing this as an example of stigmatizing categorization.


Baldwin criticises Carmen Jones, a film adaptation of Carmen using an all black cast.  Baldwin is unhappy that the characters display no connection to the condition of blacks and sees it as no coincidence that the main characters have lighter complexions.


Baldwin points out that the rent is very expensive in Harlem.  Although there are black politicians, the President is white.  On to the black press, Baldwin notes that it emulates the white press, with its scandalous spreads and so forth.  The black Church seems to him to be a unique forum for the spelling out of black injustice.  Finally, he ponders on antisemitism among blacks and comes to the conclusion that the frustration boils down to Jews being white and more powerful than Negroes.


Baldwin tells the story that happened to The Melodeers, a group of jazz singers employed by the Progressive Party to sing in Southern Churches.  However, once in Atlanta, Georgia, they were used for canvassing until they refused to sing at all and were returned to their hometown.  They now enjoy success in New York City.

"Notes of a Native Son"


Baldwin paints a vivid recollection of his time growing up with a paranoid father who was dying of tuberculosis, and his initial experience with Jim Crow style segregation.  Prior to his father's death, Baldwin was befriended by a white teacher whom his father disapproved of.  Later, he worked in New Jersey and was often turned down in segregated places — he recalls a time he hurled a cup half full of water at a waitress in a diner only to realize his actions could have dire consequences.  He goes on to say that blacks participating in military service in the South often got abused.  Finally, he recounts his father's death which occurred just before his mother gave birth to one of his sisters; his father's funeral was on his 19th birthday, the same day as the Harlem Riot of 1943.


Baldwin compares Black Americans to Blacks in France.  While Africans in France have a history and a country to hold on to, Black Americans don't — their history lies in the United States and it is in the making.

"A Question of Identity"


Baldwin explains how American students living in Paris are shocked when they arrive and are eager to return home.


Baldwin recounts getting arrested in Paris over the Christmas period in 1949, after an acquaintance of his had stolen a bedsheet from a hotel, which he had used.  The essay stresses his cultural inability to know how to behave with the police.

"Stranger in the Village"


Baldwin looks back to his time in a village in Switzerland — how he was the first black man most of the villagers had ever seen.  He goes on to reflect that blacks from European colonies are still mostly located in Africa, while the United States has been fully informed by blacks.