I want to visit Dayton, TN, on one of my trips to Tennessee.   Although "Inherit the Wind" is fictional, it shows us the deep, old-time religious beliefs of the people of the region, Bryan College, and the family of Rachel Held Evans.

"Bryan College is a Christian liberal arts college in Dayton, Tennessee, United States.  It was founded in the aftermath of the 1925 Scopes Trial to establish an institution of higher education that would teach from a Christian worldview."

RHE is making a courageous break with those traditions and beliefs.  How has she had the courage to take on these changes so publicly? 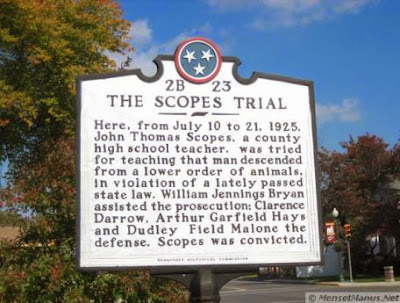 Thanks to Shirley for our next discussion questions to ponder.  In the introduction (pp.16, 17), the author states:


"I was told that belief in evolutionary theory and belief in a personal, loving Creator are mutually exclusive ... I have a feeling that if Darwin turns out to be right, the Christian faith won't fall apart after all. ... faith can survive just about anything as long as it's able to evolve."

The strong belief by many fundamentalists that evolution did not occur creates a problem when confronted with evidence to the contrary.  Many school districts still refuse to teach evolution.  Should schools comply with the insistence of their constituents, or should science be presented in accordance with current research? 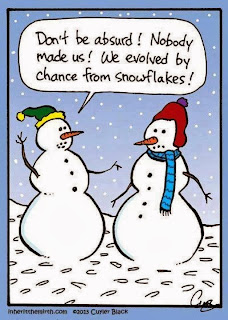 This cartoon spoofs the idea of evolution.
__________
***  The muscles connected to the ears of a human do not develop enough to have the same mobility allowed to monkeys.  The photos above show Darwin's tubercle, also called Darwin's point.
Posted by Bonnie Jacobs at 11/13/2013 10:35:00 AM 2 comments:
Labels: EMT 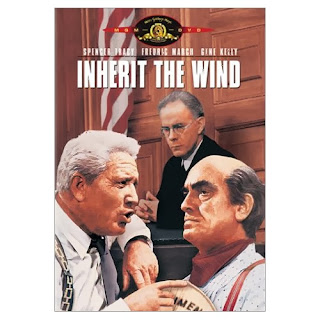 MaryZorro said, "If we do choose to read Evolving in Monkey Town, I recommend that we also read the play 'Inherit the Wind' and watch the Spencer Tracy movie.  Although this gives a fictional account of the Scopes Trial, it is a metaphor for what we face in our schools and communities today with religion/science conflicts.  This is the year in Texas that we review the new science textbook adoptions and the battle is raging again as it does every time they come up.   Creationism vs. Evolution is as strong a conflict as ever."


"Inherit the Wind" ~ the play, available in book format

MaryZorro asked our first question a couple of weeks ago:


"I'll start the discussion by saying I don't think RHE is referring to biological evolution in her title or in her explanation of changes that she experiences." 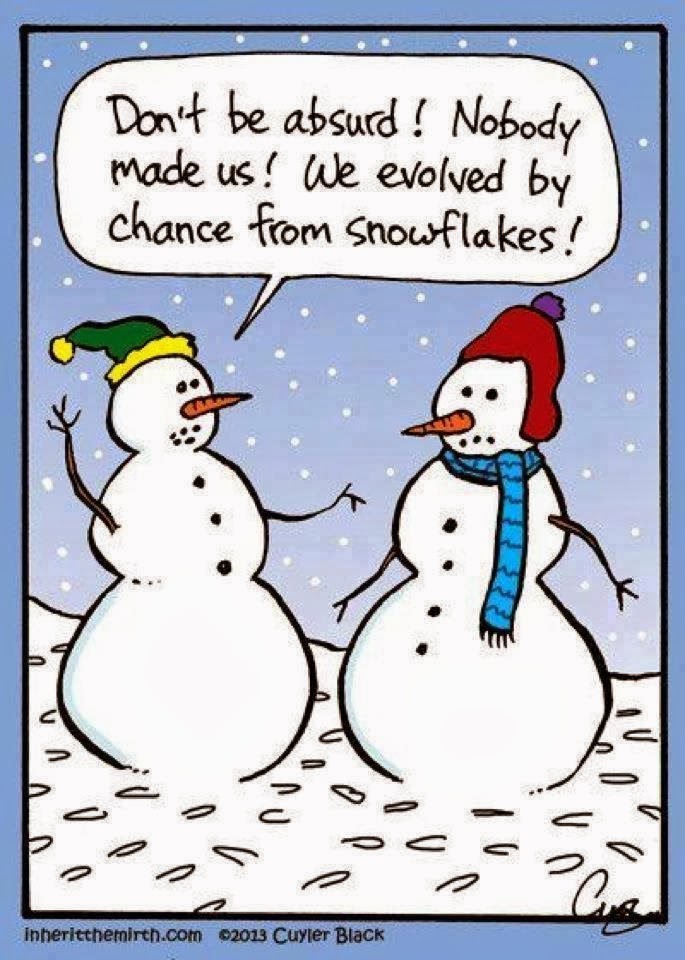 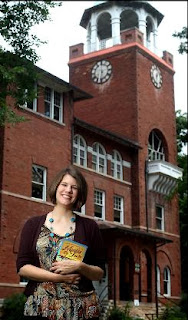 Evolving in Monkey Town: How a Girl Who Knew All the Answers Learned to Ask the Questions ~ by Rachel Held Evans, 2010, memoir


Eighty years after the Scopes Monkey Trial made a spectacle of Christian fundamentalism and brought national attention to her hometown, Rachel Held Evans faced a trial of her own when she began to have doubts about her faith.  Growing up in a culture obsessed with apologetics, Evans asks questions she never thought she would ask.  She learns that in order for her faith to survive in a postmodern context, it must adapt to change and evolve.  Using as an illustration her own spiritual journey from certainty, thought doubt, to faith, Evans adds a unique perspective to the ongoing dialogue about postmodernism and the church that has so captivated the Christian community in recent years.

Some of us have recently completed this book, and one of us (Bonnie) has it checked out of her library.  So let's go ahead and discuss this book.

What should we discuss next?


Hayat Shah is a young American in love for the first time.  His life has previously been distinguished only by his Pakistani heritage and the arguments between his parents.  But then Mina arrives — and everything changes.  Mina is Hayat's mother's oldest friend from Pakistan.  She is independent, beautiful, intelligent, and deeply spiritual, and she appears on the Shahs' doorstep in the wake of a disastrous divorce.  Even Hayat's skeptical father can't deny the happiness that Mina brings to the family.  Hayat begins to study the Quran under her tutelage, enthralled by the beauty of the text and convinced he's found his life's pursuit.  But when Mina begins dating a Jewish man, Hayat is confused by his feelings of betrayal.  His growing passions — both romantic and spiritual — compel him to act, with devastating consequences for those he loves most.

Bonnie:  I suggest we go back to fiction.  My library's information says the topics in this novel include:  guilt, religion, Muslims, Pakistani culture, betrayal, romantics, love, abusive relationships, and prejudice.  There's a reader's guide in the back, which includes discussion questions, a conversation with the author, and an essay by him that begins:


Pak Jun Do is the haunted son of a lost mother — a singer “stolen” to Pyongyang — and an influential father who runs a work camp for orphans.  Superiors in the state soon recognize the boy’s loyalty and keen instincts.  Considering himself “a humble citizen of the greatest nation in the world,” Jun Do rises in the ranks.  He becomes a professional kidnapper who must navigate the shifting rules, arbitrary violence, and baffling demands of his Korean overlords in order to stay alive.  Driven to the absolute limit of what any human being could endure, he boldly takes on the treacherous role of rival to Kim Jong Il in an attempt to save the woman he loves, Sun Moon, a legendary actress “so pure, she didn’t know what starving people looked like.”

Alison:   High on my (extremely lengthy) to-read list right now is The Orphan Master's Son, winner of the 2013 Pulitzer Prize for Fiction and the current "One County, One Book" for Salt Lake (Utah) County, where I live.

Penobscot Indian Molly Ayer is close to “aging out” out of the foster care system.  A community service position helping an elderly woman clean out her home is the only thing keeping Molly out of juvie and worse.  As she helps Vivian sort through her possessions and memories, Molly learns that she and Vivian aren’t as different as they seem to be.  A young Irish immigrant orphaned in New York City, Vivian was put on a train to the Midwest with hundreds of other children whose destinies would be determined by luck and chance.  Molly discovers that she has the power to help Vivian find answers to mysteries that have haunted her for her entire life – answers that will ultimately free them both.  This is a powerful novel of upheaval and resilience, of unexpected friendship, and of the secrets we carry that keep us from finding out who we are.

Alison:  A couple other fiction books I'm hoping to read soon are Orphan Train by Christina Baker Kline and The Rosie Project by Graeme Simsion.


The art of love is never a science.  Meet Don Tillman, a brilliant yet socially challenged professor of genetics, who’s decided it’s time he found a wife.  And so, in the orderly, evidence-based manner with which Don approaches all things, he designs the Wife Project to find his perfect partner:  a sixteen-page, scientifically valid survey to filter out the drinkers, the smokers, the late arrivers.  Rosie Jarman is all these things.  She also is strangely beguiling, fiery, and intelligent.  And while Don quickly disqualifies her as a candidate for the Wife Project, as a DNA expert Don is particularly suited to help Rosie on her own quest:  identifying her biological father.  When an unlikely relationship develops as they collaborate on the Father Project, Don is forced to confront the spontaneous whirlwind that is Rosie — and the realization that, despite your best scientific efforts, you don’t find love, it finds you.

Alison:  Lately I seem to be gravitating more to autobiography/memoir and other non-fiction reads than I've done in the past.


Woodrell tells of a deadly dance hall fire and its impact over several generations.  Alma DeGeer Dunahew, the mother of three young boys, works as the maid for a prominent citizen and his family in West Table, Missouri.  Her husband is mostly absent, and, in 1929, her scandalous, beloved younger sister is one of the 42 killed in an explosion at the local dance hall.  Who is to blame?  Mobsters from St. Louis?  The embittered local gypsies?  The preacher who railed against the loose morals of the waltzing couples?  Or could it have been a colossal accident?  Alma thinks she knows the answer — and that its roots lie in a dangerous love affair.  Her dogged pursuit of justice makes her an outcast and causes a long-standing rift with her own son.  By telling her story to her grandson, she finally gains some solace — and peace for her sister.  He is advised to "Tell it.  Go on and tell it" — tell the story of his family's struggles, suspicions, secrets, and triumphs.

Shirley:  My list of books to read includes The Maid's Version by Daniel Woodrell.