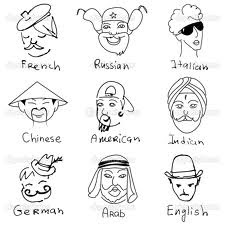 On page 121 of Turning to One Another, Margaret Wheatley says:


"I'm sure you've had the experience of stereotyping someone because of their appearance, and then being surprised when they didn't fit that judgment."

Oh, yeah!  We moved into a new house on the day before my twin daughters started kindergarten, so I didn't know the other children or their parents.  When the first little girl visited our house one afternoon, I told her mom I'd take her home.  She was an awkward child — and very excited about her new bed that she wanted to show us.  I drove to her neighborhood, following the directions her mother had given me, and let the little girl point out which house was hers as reached the corner of her street.  Expecting a small bungalow, I smiled as I glanced where she was pointing.  Taken aback, I looked again — up and up and up — one, two, three floors high, with a curved drive at the front entrance, branching off to ... was that servants' quarters back there?  A maid answered the door, and the girl's gracious mother encouraged us to go up the curved stairs in the entry, so the excited girl could show us her new canopy bed.  The whole kindergarten class with parents was later invited to visit the family's horse farm an hour's drive into the country.  Oh, how very wrong my stereotype had been! 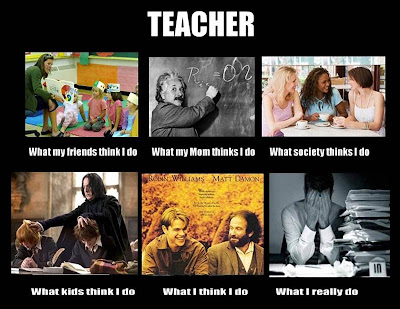 What stereotypes have we been guilty of?  Do you stereotype people by nationality?  By looks?  By how they dress?  By age?  By gender?  By race?  By occupation?  How do you stereotype teachers?  Grading papers was always my least favorite chore!  Why must we label each other, anyway? 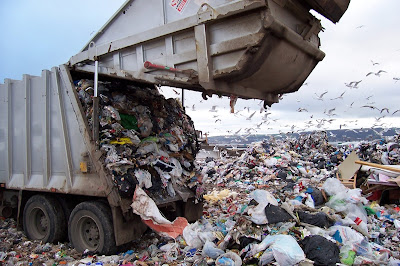 From garbage trucks to landfills to mountains of trash to a sea of garbage, also called marine pollution.  "When will we ever learn?  When will we EVER learn?" 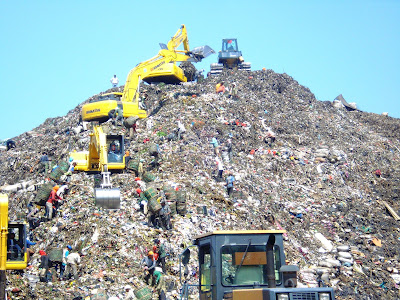 Enlarge this landfill mountain (click on photo) and see the yellow Komatsu excavators.  Those were manufactured across the street from where Donna works, and we may have seen them sitting on the lot, ready to be transported — where? — to try to control a landfill.  Notice the "tiny" humans crawling all over this "mountain."

Garbage is the result of our lifestyle.  We glorify competition — Super Bowl, anyone?  Therefore, we are in a time that many scientists refer to as "the sixth great extinction" (p. 108).  We're arrogant (Bonnie's term, not Meg Wheatley's).


"Instead of honoring nature's principle of no waste, (one species' waste is always another species' food), we decided we could accumulate huge amounts of garbage" (p. 109).

If some can see that cooperation is what life's all about, why do other insist on competition?


"Life becomes stronger and more capable through systems of collaboration and partnering, not through competition" (p. 110). 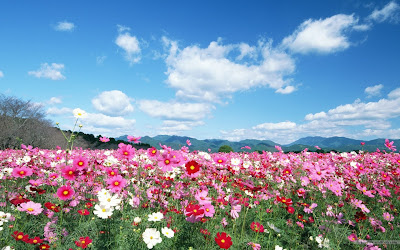 And what do we continue to do in our relationship with the earth?  We are still "trying to play god with it" (p. 113).

How do you answer Meg Wheatley's question in this chapter of Turning to One Another:  "What is the relationship I want with the earth?"
Posted by Bonnie Jacobs at 8/25/2013 01:28:00 PM 6 comments:
Labels: TTOA

When I read this sentence (p. 100), I thought of the history of Book Buddies.


"Are you encouraged to spend time ... reflecting on what you're learning?"

Here's the back story.  One day in 1996, I was paying for my purchases at Cokesbury Bookstore in Knoxville.  While the clerk was ringing up my books, I picked up the one on display near the cash register:


The Deep End of the Ocean, a new novel by Jacquelyn Mitchard, was about family torn apart when the youngest son was kidnapped.  Nine years later a young boy knocked on the door and asked the mother if she needed the lawn mowed.  She suspected he was her missing son.

The clerk noticed my interest and said, "Oprah's starting a book club, and that's the book she's chosen."  It looked interesting, so I added the book to my purchases, read it, and joined Oprah's new book club discussion on AOL.com.  Some of her readers were more active in the online discussion, and I invited them to an AOL chat room I opened for us once a week.  One of them called us "book buddies," and our group was born.  Donna was among that earliest group, and I met her and several others in person in 1998 when book buddies began getting together with each other.  A few years later, Oprah left AOL.com and went to Oprah.com.  Some of us moved with her, and I started two or three books groups at the new place — Book Buddies, Essencia Island, and Around the World in Eighty Days.  I think that's when I met both Shirley and Mary Zorro.  (Correct me if I'm wrong.)

After her mother died, Donna (AuntyDon) sold their house and moved to Chattanooga.  We opened a bookstore together in 2004 and named it Book Buddies, after the online group of friends.  Donna and I met Mary last year when she visited her daughter, who lives in a Chattanooga suburb, and the three of us walked a labyrinth together.

When Oprah suddenly and without warning took down all the book discussion groups on Oprah.com, we were left without a "home" of our own.  Years of book discussions gone, just like that.  So I started this blog for us.  Notice our URL is http://bookbuddies3.blogspot.com.  See that "3" in the middle?  This is the third incarnation of Book Buddies — first with Oprah, then as a bookstore, and now on a blog where our book discussions will remain forever available, unless Blogspot folds or closes us down.  The books we've read are listed on the sidebar, linked to our discussions since 2007.

All that to explain why I say "Yes" to Wheatley's question.  Yes, I am willing to make (or reclaim) time to think.  This blog is testimony to my answer.  See also my profile, which says, "I read to explore ideas."  Yep, I'm all for thinking about stuff. 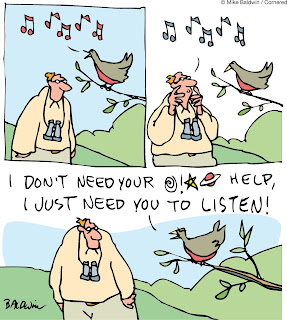 It's almost like this cartoonist has read page 92 of Turning to One Another, where Meg Wheatley wrote:

In 1982, I designed a communications skills program for Chattanooga State, which included active listening.  To do active listening means that you, the listener, should be able to say to the speaker in your own words (by re-stating or paraphrasing) what the speaker said — and do it to that person's satisfaction.  This does not mean that you agree with the person, but rather that you understand what he or she is saying.  It's surprising how little we listen to each other.

Forgive Me, a 2007 novel by Amanda Eyre Ward, is set in Cape Town, South Africa, during the time of the Truth and Reconciliation Committee meetings.  Reading that book was the first time I had really understood what took place in those meetings.  Meg Wheatley included these meetings in our book, on page 93:


"During the Truth and Reconciliation Commission meetings in South Africa, many of those who testified to the atrocities they had endured under apartheid would speak of being healed by their own testimony.  They knew that many people were listening to their story."

That doesn't seem possible, does it?  In the TRC meetings, people could talk to each other, knowing those who perpetuated the crimes would NOT be punished.  So it was strictly the telling, hearing, and healing that mattered.  And yet it was a time of healing.  Wheatley continues, with a story about one person:


One young man who had been blinded when a policeman shot him in the face at close range said:  "I feel what ... has brought my eyesight back is to come here and tell the story.  I feel what has been making me sick all the time is the fact that I couldn't tell my story.  But now ... it feels like I've got my sight back by coming here and telling you the story." 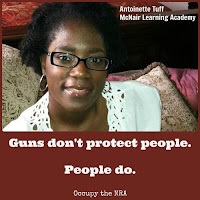 I have to add one more example of the power of good listening.  Antoinette Tuff, bookkeeper at McNair Learning Academy in Decatur, Georgia (outside Atlanta), was calm and compassionate with the angry young man wanting to die and take cops and children and teachers with him.  She listened, and she was able to talk him out of it, saving not only herself and the school people, but also the young man himself.  The whole world experienced "good listening" in the news this week, thanks to this brave hero, who admits she was terrified. 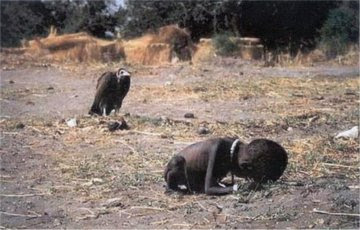 
"I am depressed ... I am haunted by the vivid memories of killings and corpses and anger and pain ... of starving or wounded children, of trigger-happy madmen, often police, of killer executioners ..."

Even the photographer suffered.  I learned about Kevin Carter several years ago, when I read Masha Hamilton's 2004 novel The Distance Between Us, which mentions him.  Her book is dedicated to "Kevin Carter and journalists everywhere who put their bodies and their souls on the line to cover war."  This photo, winner of the Pulitzer Prize for Feature Photography in 1994, haunts me.  How does it make you feel? 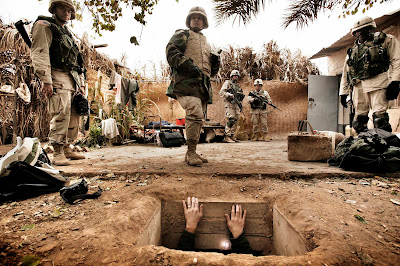 To illustrate this conversation starter from Meg Wheatley's Turning to One Another, I could see at least two possibilities:  men at war or ballroom dancing.  I chose to do both when I ran across this photo, which shows someone's hands in the foreground, apparently the hands of a prisoner.  Look closely at the hands — and make up a story about what you see.  Here's my made-up story: 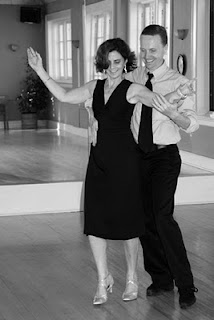 
"I see a wedding ring on the man's left hand.  Below him, there's a huge hole where others are also imprisoned.  When the man sits down with the others, he thinks of his wife and the times they danced together.  (This is a photo of Beth Kephart learning to dance.  I can't find it on her blog, but I saved it once upon a time.)  I can imagine this is the sort of thing the men were remembering as they 'taught each other ballroom dancing' (p. 78 in our book) in their prison cell." 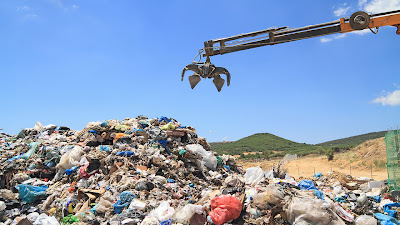 The picture above illustrates an article about Houston's plan to make landfills extinct in the future.  Margaret Wheatley mentions (on page 69 in Turning to One Another) ...


"industries that work in concert so that the waste of one becomes the resource of the next (which is how nature does it)."

What do you think Wheatley means when she asks us, "What is my faith in the future?"  She also asks several additional questions:

Margaret Wheatley wrote in Turning to One Another about a pregnant Rwandan mother of six whose village was destroyed by a massacre.  Shot first, she was left for dead, buried under the bodies of her slain children.  After giving birth to the child she was carrying, she adopted five orphaned children.


"I believe we become more fully human with any gesture of generosity, any time we reach out to another rather than withdraw into our individual suffering.  To become fully human we need to keep opening our hearts, no matter what" (p. 63).