Living in the Tension ~ by Shelly Tochluk 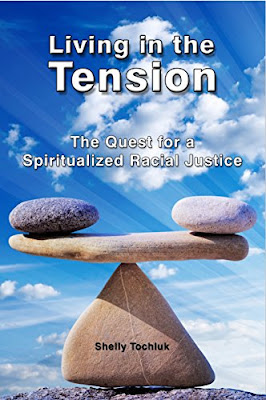 Living in the Tension: The Quest for a Spiritualized Racial Justice ~ by Shelly Tochluk, 2016

For many, spiritual and racial justice principles go hand in hand.  Yet, although seemingly compatible, tensions often arise when people try to live out their associated values and strategies.  Further, there are those who sit solidly on one side of either spirituality or advocacy and fail to see the connection between the two.


People focused on politics and social justice activism are angry, wounded, unhealthy individuals who sabotage their own efforts by using antagonistic and divisive language, including terms like oppression, privilege, and supremacy.

On the other hand, racial justice advocates often say:


People focused on their spirituality as part of their personal growth are trying to escape into transcendence or a false "kumbaya" experience and deny their ongoing role in continuing personal and institutional racism, privilege, and the reinforcement of an unjust status quo that operates through interlocking systems of oppression.

Why do these tensions matter?


There is a vast potential of untapped transformative power waiting to be released if activists and spiritual people of various racial backgrounds build and strengthen bridges between their differing principles and expectations.

How can this book help?


Each chapter tackles one tension-filled theme and asks:  What happens if one side of the tension is ignored?  How can a both/and approach allow spirituality and racial justice efforts to support one another?

Shelly Tochluk wrote an essay titled Grounding, which describes her life’s philosophical and spiritual foundation.  The 17-page PDF can be printed out, if you are interested.
Posted by Bonnie Jacobs at 12/01/2016 01:00:00 PM No comments:
Labels: Living in the Tension
Newer Posts Older Posts Home
Subscribe to: Posts (Atom)