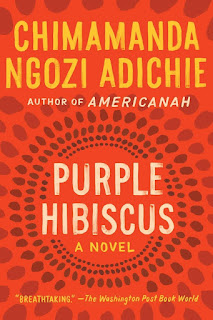 
Fifteen-year-old Kambili and her older brother Jaja lead a very privileged life.  They live in a beautiful house in Enugu, Nigeria and attend an exclusive missionary school, but their home life is not harmonious:  although their father is a respected businessman, he is fanatically religious and tyrannical at home.  When their loving and outspoken aunt persuades her brother that the children should visit her, Kambili and Jaja take their first trip away from home.  Once inside their Aunty Ifeoma's flat in the smaller city of Nsukka, they discover a whole new world.  And when they return home, changed by their newfound freedom, nothing can be the same as before.  Tension within the family esalates, and Kambili must find the strength to keep her loved ones together — even after her mother commits a desperate act.

Here's a map, showing Nigeria on the west coast of Africa.  Can you find Enugu near the bottom of the country?  Nsukka is shown just north of Enugu.   Here are some quick facts about the country.  To learn more about Nigeria, read this Wikipedia article.

Comment ANY time you like, even before we start reading the book.  Start by leaving a comment now to let us know you'll join us in the discussion.

As you read, you may want to comment about a particular scene or something that puzzles or intrigues you.  Ask questions.  Consider the first question below as you read, then comment if you like.  DO NOT read more than the first two or three questions before you have read the book, because there are spoilers in some of the questions.

If you are confused by my directions, tell me so I can make changes or clarify for you and everyone else.  We are not in any hurry to finish the book, and this post will always be here for you to come back to, even after our discussion ends.  At least, it will remain as long as "Blogger" doesn't delete the whole thing.  You can see on the sidebar (if you're on a computer) that we've discussed more than thirty books since 2007.

There are 15 discussion questions in the back of the book (the edition shown above), courtesy of ReadingGroupGuides.com.