Born a Crime ~ by Trevor Noah 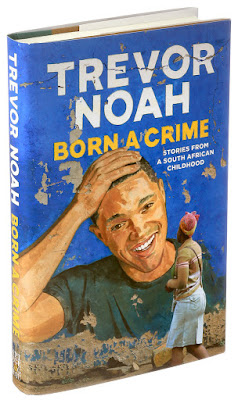 
Trevor Noah’s unlikely path from apartheid South Africa to the desk of The Daily Show began with a criminal act:  his birth.  Trevor was born to a white Swiss father and a black Xhosa mother at a time when such a union was punishable by five years in prison.  Living proof of his parents’ indiscretion, Trevor was kept mostly indoors for the earliest years of his life, bound by the extreme and often absurd measures his mother took to hide him from a government that could, at any moment, steal him away.  Finally liberated by the end of South Africa’s tyrannical white rule, Trevor and his mother set forth on a grand adventure, living openly and freely and embracing the opportunities won by a centuries-long struggle.

This is the story of a mischievous young boy who grows into a restless young man as he struggles to find himself in a world where he was never supposed to exist.  It is also the story of that young man’s relationship with his fearless, rebellious, and fervently religious mother — his teammate, a woman determined to save her son from the cycle of poverty, violence, and abuse that would ultimately threaten her own life.

The stories collected here are by turns hilarious, dramatic, and deeply affecting.  Whether subsisting on caterpillars for dinner during hard times, being thrown from a moving car during an attempted kidnapping, or just trying to survive the life-and-death pitfalls of dating in high school, Trevor illuminates his curious world with an incisive wit and unflinching honesty.  His stories weave together to form a moving and searingly funny portrait of a boy making his way through a damaged world in a dangerous time, armed only with a keen sense of humor and a mother’s unconventional, unconditional love.

It's surreal — jarring even — to read Chapter 2 while protests about police brutality have been happening five miles away in my town and across the United States.

Trevor Noah writes: "In the white areas you rarely saw the police, and if you did it was Officer Friendly in his collared shirt and pressed pants. In Soweto the police were an occupying army. ... They wore riot gear. They were militarized ... riding in armored personnel carriers ... someone was always marching or protesting somewhere and had to be suppressed" (p. 28).

We in the United States have also separated children from their parents as they were trying to immigrate here from Mexico and Guatamala and other countries south of our borders. We separated them and threw those children into cages, and then we lost track of them, even when parents were sent back to their countries of origin.

Trevor Noah writes: "Children could be taken. Children were taken. The wrong color kid in the wrong color area, and the government could come in, strip your parents of custody, haul you off to an orphanage" (p. 29).

How and why Trevor became a "chameleon" is the subject of Chapter 4. Like his mother, he learned the languages around him.

Trevor wrote: "I learned to use language like my mother did. I would simulcast — give you the program in your own tongue" (p. 55).

Some Zulu guys walking behind him one day were planning how to mug him, so he "spun around real quick" and spoke to them in their own dialect, shocking them.

Trevor wrote: "They were ready to do me violent harm, until they felt we were part of the same tribe, and then we were cool. That, and so many other smaller incidents in my life, made me realize that language, even more than color, defines who you are to people. I became a chameleon. My color didn't change, but I could change your perception of my color. If you spoke to me in Zulu, I replied to you in Zulu. If you spoke to me in Tswana, I replied to you in Tswana. Maybe I didn't look like you, but if I spoke like you, I was you" (pp. 55-56).

Since he was half black and half white, he learned belatedly, he would have to choose which group he wanted to be a part of. He went to a new school when he was eleven and was placed in the A class, which was more advanced and "better" than the B class. His real learning happened at recess on his first day.

Trevor wrote: "The white kids I'd met that morning, they went in one direction, the black kids went in another direction, and I was left standing in the middle, totally confused. ... Groups moved in color patterns across the yard, up the stairs, down the hall" (p. 57).

Then an Indian kid ran over and said, "Hello, fellow anomaly!" (p. 57). As they got acquainted, the Indian child ("another obvious outsider") learned about Trevor's ability to speak several languages, which fascinated the black kids because "it wasn't common to find a white person or a colored person who spoke African languages" (p. 57).

Trevor wrote: "I moved to the B classes with the black kids. I decided I'd rather be held back with people I liked than move ahead with people I didn't know. Being at [that school] made me realize I was black. Before that recess I'd never had to choose, but when I was forced to choose, I chose black. ... I got along with the white kids, but I didn't belong with the white kids. I wasn't a part of their tribe. But the black kids embraced me" (p.59).

My favorite chapter so far has been Chapter 8--Robert. This is where we learned quite a bit about Trevor's father. He had been out of touch with him for several years when his mother finally convinced him to look him up and reconnect. On page 105 in the Kindle edition,I find my favorite passage so far in the book. The government is trying to shut down Robert's restaurant and has been unsuccessful thus far. They have now decided to try another tactic:
"Since you've got the license you can keep the restaurant open," they said,"but you'll need to have separate toilets for every racial category. You'll need white toilets, black toilets, colored toilets, and Indian toilets."
"But then it will be a whole restaurant of nothing but toilets."
"Well, if you don't want to do that, your other option is to make it a normal restaurant and only serve whites."
He closed the restaurant.

This is how to be an ally. It includes sacrifice. How many of us are willing to make sacrifices for the movement? It is for me to ponder today.

This point about allyship is such an important one, and the question of "What am I willing to sacrifice for this movement" is one we must grapple with.

I would add that in the U.S. we have an extra step we must do, which is to recognize limiting laws and policies as either being rooted in or perpetuating the systemic exclusion of people of color. Since apartheid was state-sanctioned and openly practiced, Trevor's father probably didn't encounter a deluge of voices telling him that these policies were not, indeed, racist. By comparison, spending any amount of time on social media in the U.S. reveals a cacophony of "hot takes" any time a policy discussed in terms of racially biased motivations or impacts.

I had to return this book a few weeks ago, but one of the quotes I wrote down was, "It's easy to be judgmental about crime when you live in a world wealthy enough to be removed from it." I like this quote because it offers such a concise understanding of privilege. It is easy for me to be complicit in racism because I live in a world privileged enough to be removed from its impact. Conversely, it is difficult to challenge the institutions and policies rooted in racism for the same reason - it doesn't affect me.

Coming from a relatively small, homogenous, middle-class suburban town, I see many of my friends and family members struggling to listen to experiences outside of their own. I tend to feel overly frustrated by some of these people, but as I contemplate this quote I also feel called to have grace for them, and to continue to strive to build bridges rather than put up walls.

Emily, since I've finished the book and still have it on my Kindle, I'll type those last few pages you didn't get through and send it to you in an email. The last chapter is "My Mother's Life" (chapter 18). Do you remember if you'd gotten to the part where Trevor's mother got pregnant again, giving him a SECOND brother by Abel, the "good guy" who got violent when he was drunk? Abel's sons were Andrew and Isaac. Here's a quote:

"Isaac came and I went, and for the life of me I could not understand why she wouldn't do the same: Leave. Just leave. ... We were victims, me and my mom, Andrew and Isaac. Victims of apartheid. Victims of abuse" (p. 271).

If that doesn't sound familiar, I'll start typing a little before that. Would that work?