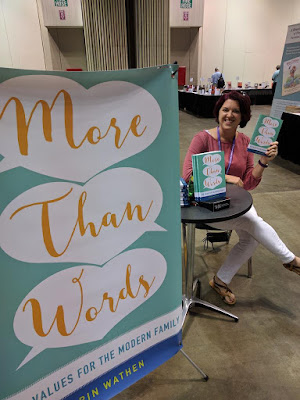 Questions The overview of More than Words is found here.  The photo above shows the author at a bookstore.
Posted by Bonnie Jacobs at 1/29/2021 11:30:00 PM
Labels: More than Words

p.16 "...Real love is not about deserving" is the key point as illustrated in the parable of the prodigal son. It is an excellent example of the two ways that can act to transform the world into a compassionate community. The father models a merciful, forgiving attitude toward the wayward son, who is asking for compassion and help in becoming a better person. The brother displays the vindictive, punishing view of the world; that of, his brother paying for his "sin." The brother will not be transformed with this attitude. There will be no ripple effect of making the world into a community of caring members.

We must be intentional in displaying and modeling behavior that is compassionate and
transformative.

Donna, you noted that Wathen makes her point using the prodigal son story (Luke 15:11–32 NRSV, which I copied below), where the brother thinks the prodigal deserves an "ass-kicking" while the father's way of "undeserved mercy" makes this a story of "transformative love" by his "mercy, forgiveness, radical acceptance" (p. 16). Most of us tend to agree with the brother, but the father showed compassion. That's love with skin on it.

The Parable of the Prodigal and His Brother

25 “Now his elder son was in the field; and when he came and approached the house, he heard music and dancing. 26 He called one of the slaves and asked what was going on. 27 He replied, ‘Your brother has come, and your father has killed the fatted calf, because he has got him back safe and sound.’ 28 Then he became angry and refused to go in. His father came out and began to plead with him. 29 But he answered his father, ‘Listen! For all these years I have been working like a slave for you, and I have never disobeyed your command; yet you have never given me even a young goat so that I might celebrate with my friends. 30 But when this son of yours came back, who has devoured your property with prostitutes, you killed the fatted calf for him!’ 31 Then the father said to him, ‘Son, you are always with me, and all that is mine is yours. 32 But we had to celebrate and rejoice, because this brother of yours was dead and has come to life; he was lost and has been found.’”