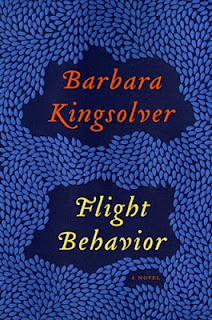 
In the opening scene in the rural community of Feathertown, Tennessee, 29-year-old Dellarobia Turnbow is headed for a secluded mountain cabin to meet a man and initiate what she expects will be a self-destructive affair.  But the tryst never happens.  Instead, she walks into something on the mountainside she cannot explain or understand:  a forested valley filled with silent red fire that appears to her a miracle.  The arrival of a research team led by Ovid Byron reveals the troubling truth behind the butterflies' presence, that they've been driven by pollution from their usual Mexican rywinter grounds and now face extinction due to northern hemisphere temperatures.  Already restless in her marriage to the passive Cub, for whom she gave up college when she became pregnant at 17, unsophisticated, cigarette-addicted Dellarobia takes a mammoth leap when she starts working with the research team.  As her horizons expand, she faces a choice between the status quo and, perhaps, personal fulfillment.

It's January, and our new book of the month is open for discussion. I'm looking forward to whatever Mary/Zorro has to share with us about Flight Behavior.

How many of you have finished reading Flight Behavior?

I have only finished the first two chapters. If others are finished, don't wait for me to begin discussing the whole book.

I haven't started it yet - although I hope to get to it within the next several days.

I am sending discussion questions to Bonnie for posting, and I am just asking about the first chapters. I hope not to post any spoilers.

Here's an excellent review of Flight Behavior by Wendy, whose blog is Caribousmom:

Here's an update on the monarch situation in Texas. Mary/Zorro posted this link on Facebook:

The situation for monarch butterflies keeps getting worse. Here's an article about illegal logging in Mexico.